Love being close to the stage, at your favorite band’s concert?  Leave the transportation to us!

When heading to events like concerts or festivals, transportation is the last thing you want to deal with.  Let us take care of it!

If you love music, you know that nothing boosts your mood better than a good concert. What makes the experience even more extraordinary is the right transportation. Whether you need a van for a band or a large group, or you want to arrive at the show in a luxury car- just like a VIP, Elite Black Car Services has the best Los Angeles and Orange County concert events transportation solutions for you.

Why worry about driving through stressful traffic, trying to find a parking spot, being late, or drinking, when you can sit back, relax, and have fun on the way with your friends or family.  We take pride in having a diverse fleet of well-maintained luxury sedans, SUVs, and vans to accommodate even the highest expectations.  Call us and let us help you select the vehicle that best matches your needs. 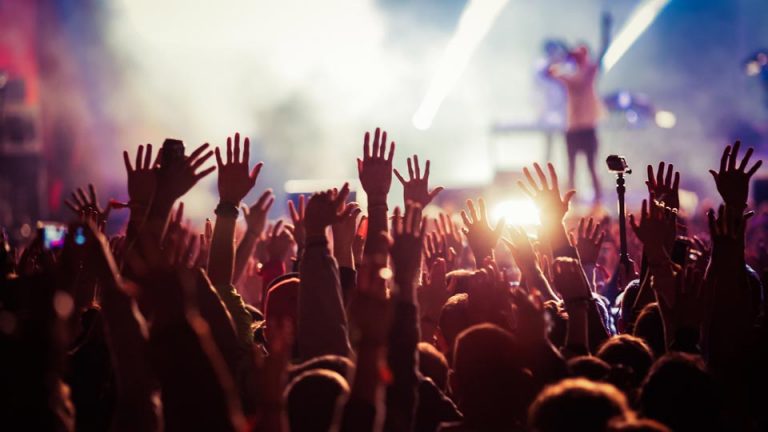 Get to your concert feeling relaxed and happy

Get to your destination safely and make the most of your time at the concert.  Contact Elite Black Car Services to book your transportation and arrive in style, just like a Rock Star.  Let our professional chauffeurs do the driving and get you and your group to and from the concert in complete comfort.  We will make sure everyone has a good time and enjoys the evening.

Our courteous and friendly chauffeurs are highly-trained and experienced in knowing how to navigate efficiently into and out of all Southern California concert venues so that you get to your show on time and happy.

The more affordable of the two options: your driver will take you to the game and return to pick you up at a pre-arranged pick up time. The pickup would be at an agreed upon point and is usually the area where your driver drops you off. If your game gets delayed or goes into overtime, we make sure that you have driver contact information to adjust pick up times. (This can also be done through our main dispatch number at (888) 242-7719. Please note that hourly wait time fees may apply.)

If you would like the convenience of having your driver wait on location, we offer hourly service. This way the driver will wait on location for the duration of the event, and you can be as early or as late as you wish. There is no need for you to notify your driver or dispatch about running late. An additional advantage of booking hourly service with us is you will have the same driver for the night, and you can leave your belongings in the vehicle.

With that said, here are all the Southern California concert venues we service: 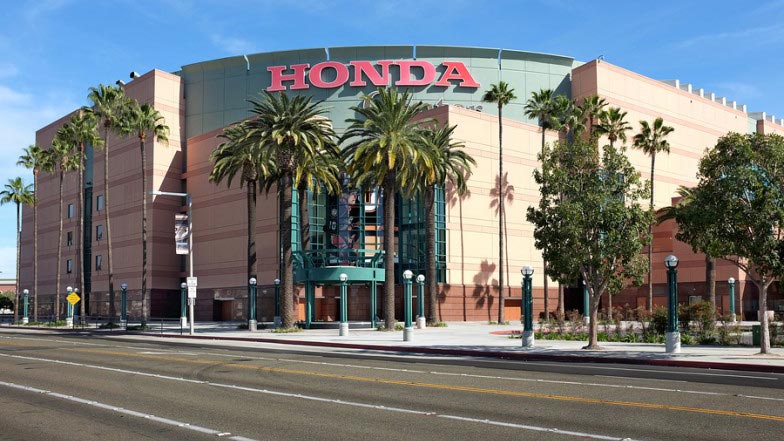 The Honda Center in Orange County is the sister venue of Staples Center in Los Angeles and is located near Angel Stadium of Anaheim.  It is home to the NHL’s Anaheim Ducks, and also hosts a variety of large concerts and other events, much like Staples Center.

Depending on what type of event is being hosted here, the Honda Center seats nearly 19,000 people.  With such a large capacity, parking at the Honda Center can be expensive or a very long walk because the lots near Honda Center become full. 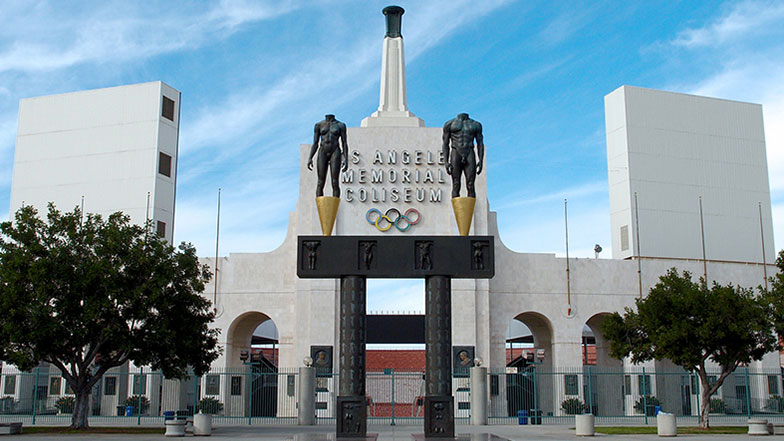 The Los Angeles Memorial Coliseum is an outdoor stadium located in the Exposition Park neighborhood of Los Angeles, California.

With a seating capacity of over 93,000 and limited parking, getting into and out of a concert at the Coliseum can take a long time. 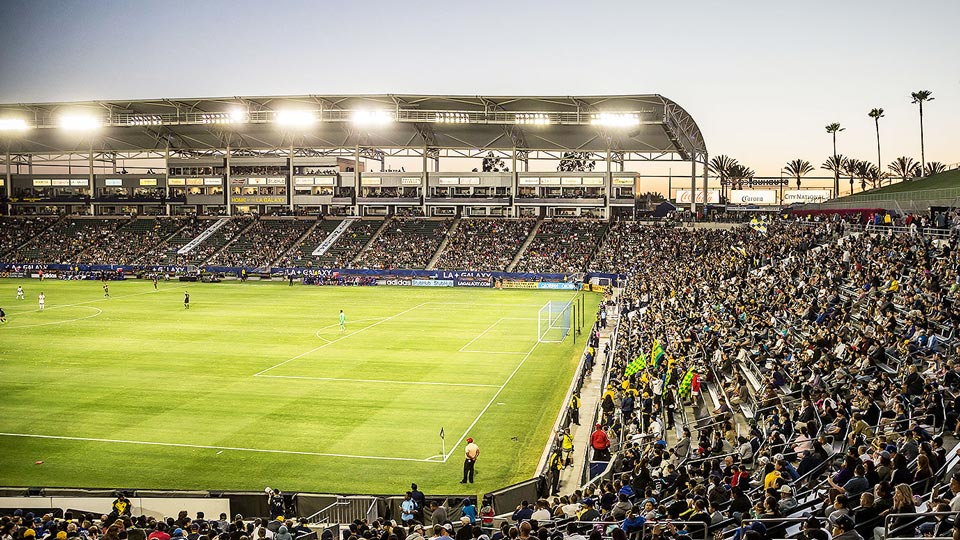 StubHub Center, formerly the Home Depot Center, is a multiple-use complex located on the campus of California State University, Dominguez Hills in Carson, California.  Approximately fourteen miles (23 km) south of Downtown Los Angeles, the StubHub Center has a capacity of 27,000.

The House of Blues 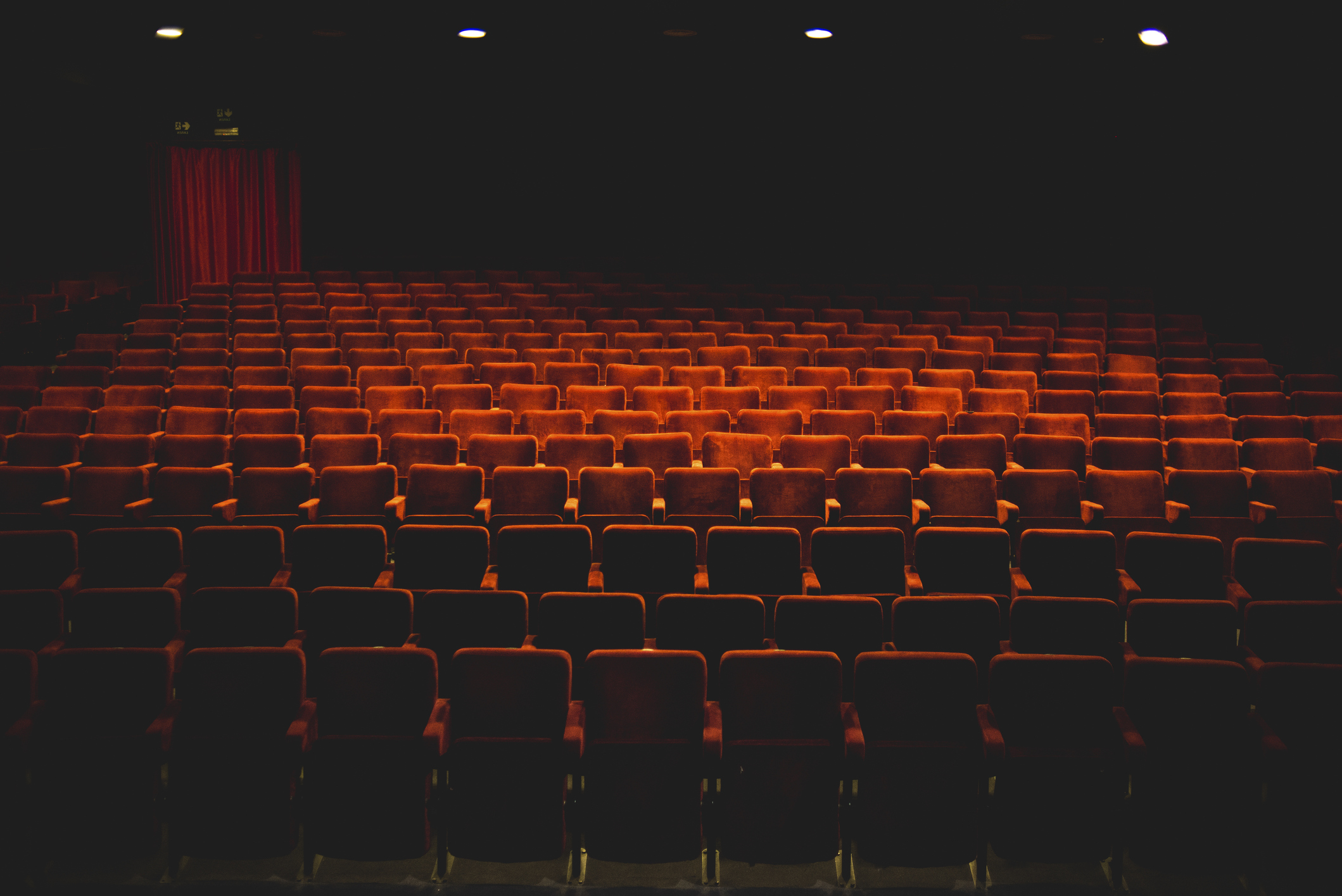 The Microsoft Theater (formerly Nokia Theatre L.A. Live) is a music and theater venue in downtown Los Angeles, California located within the  L.A. Live mall.  The theatre auditorium seats 7,100, and holds one of the largest indoor stages in the United States.

It is one of the premiere concert venues in Los Angeles, and has hosted a multitude of concerts, along with the ESPY Awards and the AMAs since it’s opening in 2007.  It opened originally as the Nokia Theater but was re-branded in 2015 as the Microsoft Theater.

Parking and driving in this area is pretty busy, especially when there are events going on at both the Microsoft Theater and Staples Center, in which case surrounding streets are sometimes closed off.

Elite Black Car Services knows the ins and outs of the area, so we will make sure you have a comfortable and enjoyable evening out. 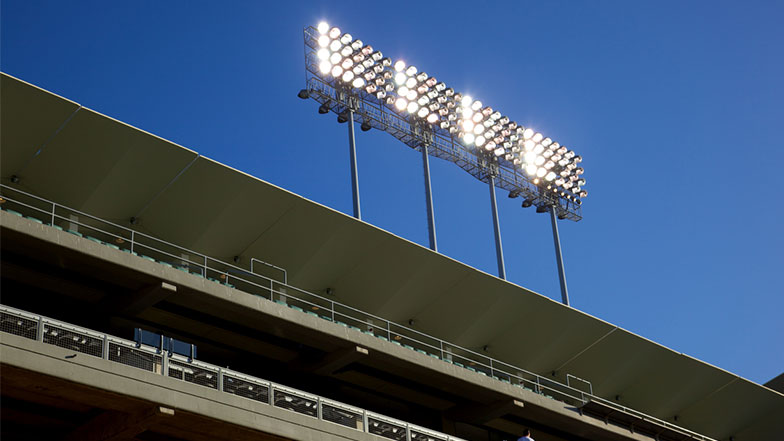 Angel Stadium of Anaheim is a modern-style ballpark with a waterfall in the outfield and is located in Anaheim, California.  On occasion, Angel Stadium (or Anaheim Stadium) is known to host some very large concerts.

Angel Stadium and its surrounding parking lot are roughly bound by Katella Avenue to the north, the Orange Freeway to the east, Orangewood Avenue to the south, and State College Boulevard to the west.

Angel Stadium has a capacity of roughly 45,000. 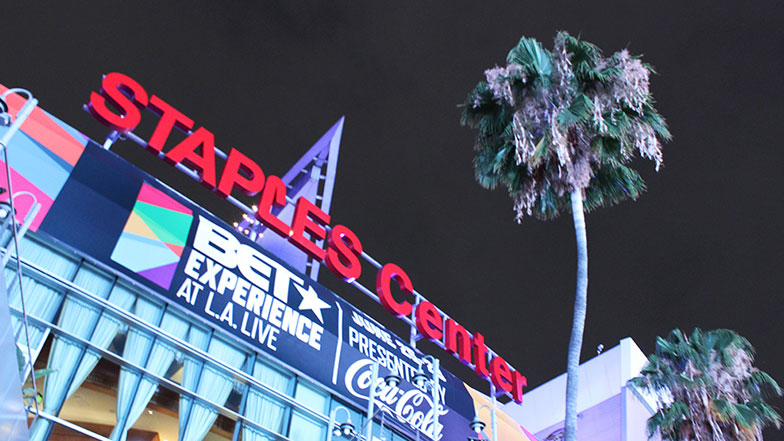 Staples Center, officially stylized as “STAPLES Center,” is a multi-purpose arena in Downtown Los Angeles.  Adjacent to the L.A. Live development, it is located next to the Los Angeles Convention Center along Figueroa Street.

The Staples Center is host to more than just Lakers games.  The venue is home to a slew of concerts, special events and more.

Given that the Staples Center is in the heart of Los Angeles, and with a maximum capacity of more than 19,000, parking, traffic, and getting in and out of the area can be a hassle.  Count on our professional chauffeurs to navigate the area and get you to the venue with ease. 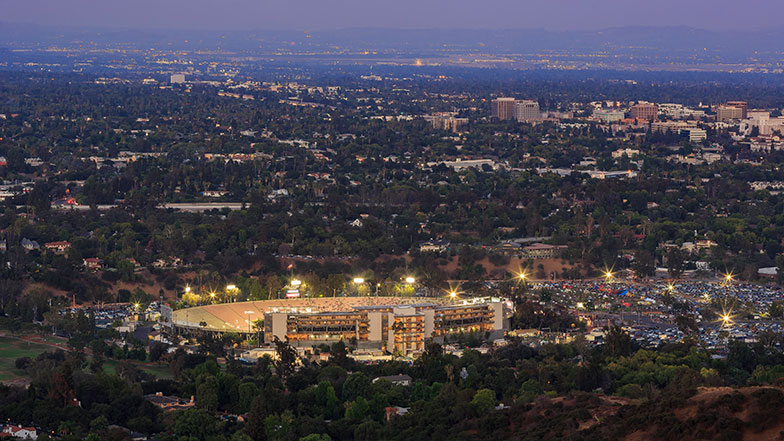 The Rose Bowl is an outdoor stadium, located in Pasadena, California- a northeast suburb of Los Angeles.  One of the most famous stadiums in history, the Rose Bowl is the largest concert stadium in California with a capacity of over 90,000.  We only offer transportation to the Rose Bowl as an hourly option, and you would pay for the parking inside the stadium.  We do not offer pickups from outside the Rose Bowl grounds, as we cannot get within a mile of the property after any event. 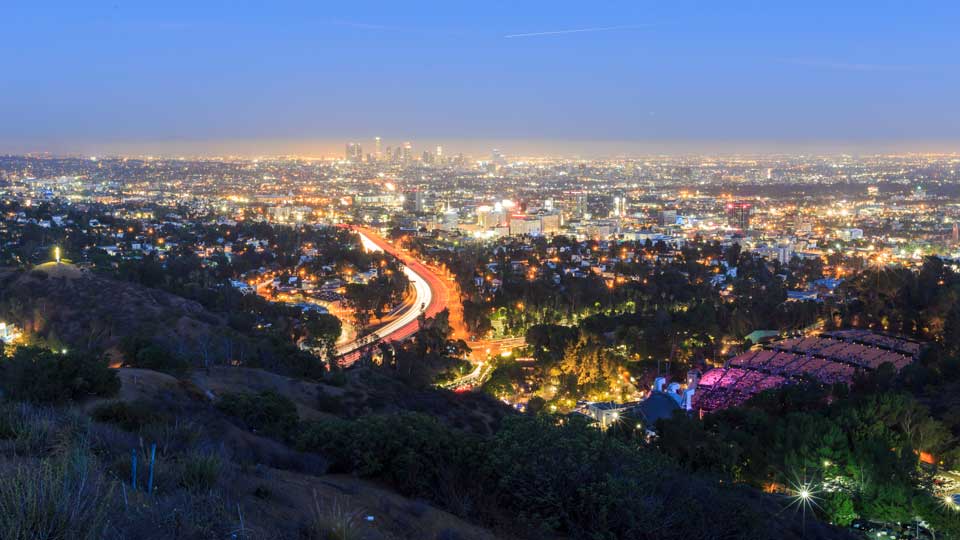 The Hollywood Bowl is an amphitheater in the Hollywood Hills neighborhood of Los Angeles, California, and is one of the oldest and most famous venues in Los Angeles.  Being host to some of the most recognizable names in music, it is home to a plethora of concerts and has attracted some of the best artists from all around the world.

With a seating capacity of just over 17,000, the Hollywood Bowl is a massive concert venue.  It takes up a lot of space on the hill that it rests on, and parking there is usually stack parking in the lot.  If you’d like to avoid the mysteries of what happens to your car with stack parking, or the hassle of trying to walk from a couple miles away, Elite Black Car should be your go-to for excellent service.

The Forum is a multi-purpose indoor arena in Inglewood, California.  It has a capacity of 17,500 and is adjacent to Los Angeles.  Located between West Manchester Boulevard, across Pincay Drive and Kareem Court, it is north of the under-construction Los Angeles Stadium at Hollywood Park and the new Hollywood Park Casino.  It is about three miles east of Los Angeles International Airport (LAX).  The Forum is a legendary venue that has played host to such acts as Elvis, Led Zeppelin, Prince, and Barbara Streisand. 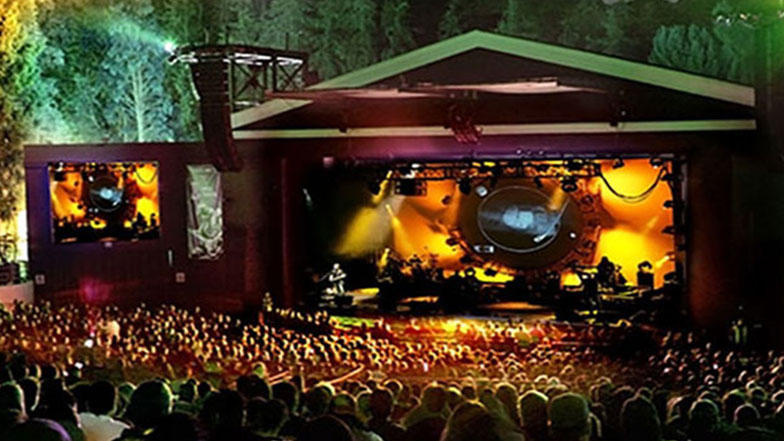 The Greek Theatre is a 5,870-seat music venue located in Griffith Park, Los Angeles, California.  The theatre stage is modeled after a Greek temple.

In our opinion, The Greek Theatre is one the best places to see a concert in Southern California.  It has a small and intimate atmosphere, and stars suddenly appear in the sky while the moon ascends at the backdrop of the performance.

Commonly known as “The Greek”, the venue has won Best Small Outdoor Venue award seven times in the past eight years by Pollstar Magazine- the industry’s leading trade publication.  Nestled on a hill, The Greek offers attendees stacked parking, which means if you don’t arrive early, there will be a long wait to get your car off the grounds.

Elite Black Car has the experience, the fleet, and a team of professionals to get you to your destination in comfort and style.